We prefer the trapping method of mole control because it is the time-tested, proven method of control. There are many other “methods” of “mole control” — less than adequate strategies and methods, as well as old wives’ tales. There are also some methods that provide some results, but not the best results.

Mole trapping is a measurable method of mole control. When a mole is trapped, you actually get a “head count” (literally)! We make weekly visits to your property to check traps, placing the proper amount of traps, depending on the current level of activity. You do not pay based on the number of traps we set. Whether we place 6 traps or 26 traps, you pay the same quoted price for service, with no long-term contracts!

You also have the option of year-round protection for your property by paying for an annual program. This program is recommended for those whose properties typically have a significant amount of moles in their property throughout the year.

Mole control is a process that often takes time, patience, and persistence. There are no proven, consistent methods of mole control in which one application can rid a lawn completely of moles. We utilize the trapping method and check the traps on a regular basis while emailing you a service report at each visit.

There are also probing tunnels — tunnels moles construct, usually in search for food — that they may never re-enter.  Our weekly visits are designed to identify and set traps on the active tunnels by making repeat visits as well as find new tunnels entering the property.

The goal of mole control is to prevent and minimize lawn damage by trapping and removing moles. Since there are no proven preventive mole control measures, moles must be dealt with as they arrive.

How Our Service Works

Initially, we set an appropriate number of traps, marking them with flags.

Note:  please do not tamper with traps; keep children and pets away at all times.

Here are some answers to common mole questions.

How many moles are in my lawn?

The number of moles present in lawns can vary greatly; there is no formula for determining how many moles might inhabit a lawn. Where mole activity is found, there is usually more than one mole present.  Oftentimes, more moles are present than most people anticipate. A female produces 2-6 young per litter in the spring. Moreover, multiple families can be present, adding to the problem.

How long will I need your service?

There are several factors that come into play here — the extent of mole activity, the size of your lawn, number of moles present, environment, time of year, weather, and new mole activity — as well as many other factors that play a role in mole eradication. Therefore, it is impossible to say how long the service will be needed.

Many of our clients need the service for a short amount of time (i.e. a month) if they have a smaller infestation.  Others, who have larger lawns in areas where moles are more prevalent, may need mole control all season long.  A typical scenario (note that this is typical, not a guarantee) that we have seen is that a client needs mole control for a month or two, then does not need the service for some time.  Moles (in this scenario) return in the future.  Our clients call us back to begin another round of mole visits.

For this reason, we do not require long-term contracts.  For others, though, a long-term agreement makes sense — and saves them money in the long run.

Where do you place the traps?  How many traps will you set?

We make regular service visits with the goal of identifying active mole tunnels.  Active tunnels are the tunnels that moles will use on a regular basis, while probing tunnels are created by moles and used rarely, maybe only once.

It’s like looking at a road map that contains many different roads, including interstate highways, state routes and rarely traveled areas such as township roads. By identifying the “interstate” tunnels and placing traps on them, we trap more moles, resulting in better/quicker results.

We are great at identifying active tunnels.  However, identifying these tunnels also requires some “trial and error” during the process.  This is why we make multiple visits at approximately a week apart.

What Do Moles Eat?

Moles primarily eat earthworms.  Moles are also known to eat white grubs and other insects, but the vast majority of their diet consists of earthworms.

Grub control may be a good way to protect your lawn from grub damage, is not an effective method of mole control.

In the Cincinnati area, we see different broods of the 17-year cicada.  As the cicada nymphs grow in the soil, they become an ample source of protein for moles.  As a result, females produce more young in their litters.  This is why many homeowners experience a significant amount of mole activity leading up to the years when cicadas emerge.

The bottom line is that moles love big, juicy worms!  Since this is the case, they always have something to eat.

Is there something I can do to help identify active tunnels?

Before calling us to set up service, we encourage homeowners to first stomp down all the tunnels in their lawn.  If there is no activity, we suggest that you wait before starting service.  This could save you some money! If, however, the tunnels reemerge, then it’s time to call Cincinnati Mole Control!

After you set traps on my property, I see that you did not place traps on the mole mounds.  Why is that?

Mounds (as opposed to tunnels) are deposits of dirt that the moles place in order to excavate their tunnels, especially when the tunnels are deeper in the ground.  Moles, however, are trapped more easily when traps are placed in active tunnels.  Placing traps on mounds is not very effective.

We make regular service visits for the purpose of identifying active tunnels.  Placing the traps on active tunnels leads to better results.

How do I know if a trap has been “tripped”? 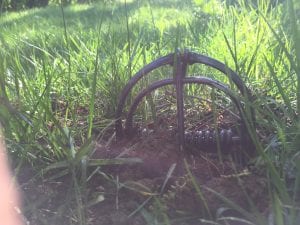 We use scissor-type traps. These are the most effective trap when properly installed by our experienced technicians.

We use Victor Out’ Site mole traps.  These traps are among the more difficult ones to set, but we have found them to be the most effective.  About half of the trap is below the surface — the “scissors” part of the trap that catches the mole.  You won’t actually see the mole.

When a mole is trapped, the “horseshoe” bars above the ground separate, indicating that the “scissors” below the surface have closed, capturing the mole.

When looking at the trap from the top, you can see that the trap is in the “set” position.

This aerial photo of the trap shows the “horseshoes” separated, indicating that the trap has been tripped: 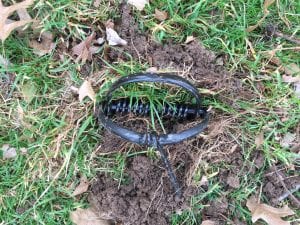 When the bars are split apart, the trap has been tripped.

Note, though, that just because a trap has been tripped, it does not necessarily mean that a mole has been caught.  Sometimes traps are inadvertently bumped by people, lawn mowers and wildlife.  Always avoid the traps, and inform your lawn company of the traps (we also place a flag next to the trap) to help minimize bumping of the traps.

What precautions should I take regarding the traps?

Do not tamper with or touch the traps.  Keep children and pets away from the traps at all time.  If you suspect tampering, give us a call!

Can the traps harm my children or pets?

They certainly can if children or pets tamper with them, so keep them away!  Traps can be dangerous if they are pulled out of the ground.  They can also be dangerous if a child sticks his or her hand down in the tunnel under the trap.

Pets are rarely harmed by the traps.  As a matter of fact, we have never had a client’s pet harmed by a trap yet.  A dog, for example, would have to dig at just the wrong angle in order to trap its paw, therefore it is rare that a dog would be harmed.  However, it can (even though it is rare) happen!

What happens after the moles are trapped?

The traps kill the moles quickly.  This is what makes it a more humane method of control.  Other methods, such as baiting, takes longer for the mole to die.

Do moles hibernate?  Do I need mole control in the winter? 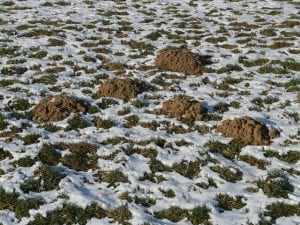 Moles can be active in the winter as well.

Moles do not hibernate and are active all year round. In colder seasons, such as winter in the Cincinnati area, moles will tunnel deeper when the surface of the ground is frozen, but they still move around. Moles typically follow the food source, which is mostly earthworms. In the winter, when the ground is frozen, the earthworms tunnel deeper in the soil, where moles follow.